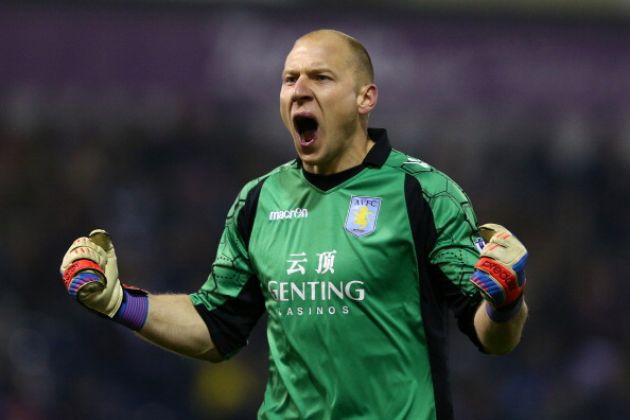 Editor’s Note: This article originally appeared on football.com on 4/30/2013.

Brad Guzan is a game-changer on offense as much as defense.

Watching Aston Villa thoroughly dismantle Paolo DiCanio’s Sunderland side, the obvious takeaway was the potency of Villa’s attack led by Gabriel Agbonlahor and the ferocious Christian Benteke. Yet at the end of the game, one swift kick from Brad Guzan when the match was still goalless stood out above all the fireworks.

Every highlight of the opening goal–Ron Vlaar’s crack from well beyond 30 yards–is sure to exclude how precisely the Villa attack began. After gathering the ball in his own box, Guzan drove a low side-volley punt 75 yards into the path of Agbonlahor, leading him up the right sideline. Before Sunderland could recover from their previous attack, Agbonlahor swung in a dangerous cross, leading to two blocked shots for Villa and creating the deflection that ultimately led to the first goal.

Guzan, affectionately known as the “polar bear”, is notorious for getting his hands on top corner shots that he has no business saving. But it is his distribution that truly sets him apart. In a game where Sunderland spent most of their time playing defense, Guzan repeatedly dropped 60 yard kicks into Benteke’s chest and feet, allowing Aston Villa to start inside their opponent’s half.

Younger goalkeepers are taught that the difference between a good keeper and great one is holding onto the ball after a save, never allowing a follow up opportunity in front of goal. What, then, distinguishes the best keepers in the top divisions around the world?

Or proves them worthy of being named number one for their country?

Distribution. Like a great rebounder in basketball, when Guzan collects a ball in the box he already has his eyes up looking for the outlet pass downfield. The result of this quick, precise distribution is a potent attack like the one on display today at Villa Park.

Chance possession from the uninspired and commonplace tactic of lumping the ball forward–employed by even the greatest of keepers and offenses around the world–becomes almost certain retention of the ball. More importantly, routine attacks that typically build from the back turn into immediate counterattacking opportunities going forward, many times bypassing the midfield altogether.

There is a reason why Villa can afford to have so many attackers going forward. They have a polar bear in their corner.

In beating Sunderland, Aston Villa took a major step toward a premiership campaign next season. They are not clear yet, but if they survive the relegation battle, remember that Brad Guzan did a whole lot more than just save them from relegation. He led them to victory.